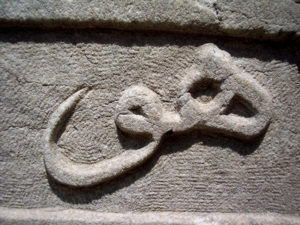 This glossary is intended only to provide brief explanations of some of the more unfamiliar words and references that appear on this website.

For a much more comprehensive explanation of the many technical sufi terms and metaphors, the reader is referred to the Sufi Symbolism series by Dr. Javad Nurbakhsh. This 16 volume compilation contains an extensive interpretation of the mystical imagery concerning the Beloved used in sufi poetry generally, as well as discussions of the many fundamental concepts and terms in sufi thought and writings. Read more.

adab:
in ordinary usage, decorum, etiquette, rules of behavior, or manners. In Sufism, adab refers to the proper outward manner or code of behavior to be observed by the disciple in order that he be in harmony with all people at all times.

baqa:
the beginning of the 'journey in God' which follows fana and the completion of the Spiritual Path (tariquat), of travelling towards God.

darvish:
a word of Persian origin meaning 'poor', which is used by sufis to indicate the poverty that they choose for themselves. In this respect, not every sufi is a darvish, nor every darvish a sufi.

dkhir:
a Name of God transmitted to the disciple in a special manner by the sufi master (note: an alternate spelling for dkhir is zekr).

fana:
the passing away of the self in God; the spiritual station (maqham) which is the end of the Spiritual Path (tariqat), of travelling towards God.

ka’aba:
the house of God in Mecca and place of pilgramage (haj) for moslems.

khaniqah:
the Persian word for the house where the sufis gather.

Perfected One (insani kamil):
an individual who has become free from the dictates of the 'commanding self' (nafs-e ammareh), that aspect of the unconscious which drives man to satisfy his animal, sexual, and aggressive instincts.

possible being:
In Islamic philosophy, God is termed the Necessary Being because His existence depends solely upon Himself, as distinguished from all other being which depends upon Him for its existence and therefore has but possible being.

qiblih:
the direction in which moslems pray, towards the ka'aba.

rend (plural, rendan):
in ordinary usage, a rogue, reveler, or profligate. In sufi terminology, rend refers to a person who conceals his inner state so fully that he may have finished travelling the Spiritual Path yet still appear to be an ordinary person. The term also signifies the sufi who sees into others' hears and is never deceived by anyone, and who is master of his own manifestations such that he can create any appearance he wishes.

Spiritual Poverty (faqr):
the feeling of being imperfect and needy, combined with a desire for perfection.

tavern of ruin (kharabat):
a technical term for the 'journey in God' which follows the completion of the Spiritual Path, of travelling towards God.